I picked up a couple of good books at a garage sale recently. One of them was The Nice and the Good, Iris Murdoch’s eleventh novel.

Several chapters in and I’m so very impressed:

“Pierce became aware of his mother and turned slowly to face her. He rarely moved fast. He looked at her without smiling, almost grimly. He looked at her like an animal, cornered but not frightened, a dangerous confident animal. And Mary apprehended herself as a thin dark woman, a mother, a representative somehow of the past, of Pierce’s past, confronting him as if she were already a ghost. This came to her in an instant with an agony of possessive love for her son and a blinding pity of which she did not know whether it was for him or herself. Next moment, as she searched for something to say, she took in the scene, Barbara’s pretty room so tidy and empty now, but already expectant. And with an immediate instinct of her son’s vulnerability she saw the huge shell design as utterly untimely. It was something that belonged to the quietness of Pierce’s thought about Barbara and not to the hurly-burly of Barbara’s actual arrival, which Mary now anticipated with a kind of dread. The careful work with the shells seemed to her suddenly so typical of Pierce, so slow and inward and entirely without judgement.”

It’ll be worth adding The Nice and the Good to my Kindle library alongside The Black Prince. As I’ve mentioned before, probably sounding like a cracked record, I like to bookmark my favourite passages, add notes, and also extend my vocabulary using the Kindle’s inbuilt dictionary.

The hardback copy I found is an ex-library book and still in reasonably good condition. The question I ask myself is why was it discarded?

Perhaps, in touting the benefits of a digital e-reader,  I’ve answered my own question. Libraries are changing with the times. No bad thing.

Iris Murdoch was born in Dublin on July 15, 1919 and grew up in London. She was educated at Badminton School in Bristol and studied classics at Somerville College, Oxford from 1938 until 1942, receiving first-class honors. Her first novel, Under the Net, was published in 1954. Twenty-three more novels followed, each written in longhand and personally delivered to her publishers in London:

“I have never touched a typewriter, and still less a word processor.”  from a New York Times Books interview with John Russell, February 22 1990.

And yet, according to an Independent (UK) interview between Iris and Angela Lambert in 1992:

In her absence I looked around the sitting room. Its windows were almost covered by foliage from the garden, so that the sunshine filtered through with a pale green, subaqueous light, emphasised by apple green walls. The floor was covered with a large oriental carpet, which was itself covered with books, mugs, magazines (the National Geographic with an article on the Kurds), two typewriters, some envelopes and plastic bags.

Furthermore, a report, in the Oxford Mail, following the sale of the late author’s belongings at a book fair in 2011:

The unusual collection of personal belongings, including the writer’s typescripts and photographs, was found by the family who bought Miss Murdoch’s former home in Steeple Aston.

Bookseller Christian White bought them last year and put them up for sale again at the Oxford Book Fair at Oxford Brookes University on Saturday. “It’s just incredible what they chose to leave behind. There are dozens of photographs, typescripts, even Iris’s ice-skates and her typewriter.”

It occurred to me that these reviewers and interviewers had overlooked, or chosen to ignore, the fact that these typewriters may well have belonged to the late author’s husband. Iris married John Bayley, an Oxford don, literary critic and writer, in 1956.

And then I came across a review of John Bayley’s book: Elegy for Iris: A Memoir written very soon after his wife’s death:

Although there are many beautiful, touching passages in John Bayley’s memoir of his wife Iris Murdoch, who was diagnosed with Alzheimer’s disease in 1994, I am left with the impression that Mr. Bayley has, in some way, betrayed an unspoken trust. He doesn’t air the contents of her diapers, but he takes his reader placidly through the indignities of Ms. Murdoch’s day, which once began with her settling at the typewriter soon after 7 but now begins with prolonged, heavy sleep and culminates in her avid watching of Teletubbies.

Is it credible that Iris, faced with dementia, no longer able to write longhand, took to using a typewriter? Or did John and Iris “settle at the typewriter” together, John playing the role of both doting husband and typist? 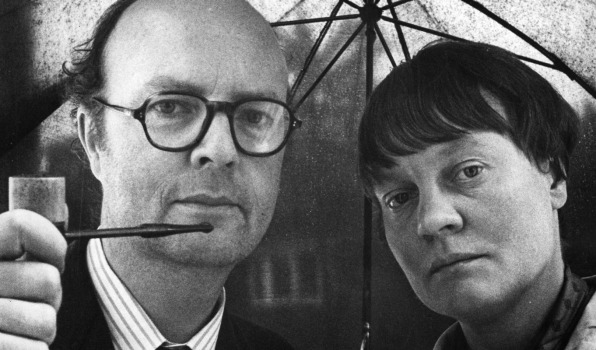 John Oliver Bayley was Warton Professor of English at the University of Oxford from 1974 to 1992. He died on January 12th 2015, at his home in Lanzarote, in the Canary Islands, aged 89.