Hrabal began as a poet, producing a collection of lyrical poetry in 1948 (Ztracená ulička). It was withdrawn from circulation when the communist regime was established. In the early 1950s, Hrabal was a member of an underground literary group run by Jiří Kolář, an artist, poet, critic and central figure in Czechoslovak culture. Another member of the group was the novelist Josef Škvorecký. Hrabal produced stories for the group, but did not seek publication.

In 1956, Hrabal married Eliška Plevová, a German-Czech kitchen worker in Prague’s Hotel Paris, and they bought a cottage in Kersko, home to his many cats. Hrabal became a paper baler on Prague’s Spálená Street while writing his fiction on a German Perkeo typewriter with no Czech diacritics:

“It was a tiny machine, from around 1905, the roller could be tilted down, and I carried the closed up machine on two straps, like school books were carried under the Monarchy. I was amazed by this machine, I wrote on it merely for pleasure. The accents were missing, so that each typewritten page caused a smile and a laugh. I learned typing on it so brilliantly that I was able to write on it at night, too, as blind pianists play their instrument.”

Between 1957 to 1959, Hrabal wrote a collection of stories called Pearls of the Deep (Perlička na dne). They included collage and montage elements and emphasised natural dialogue. In 1959, he divided his time between writing and working part-time as a stagehand at Prague’s S.K. Neumann Theatre.

A second collection of stories called Larks on a String (Skřivánci na niti) took four years to pass the censors. 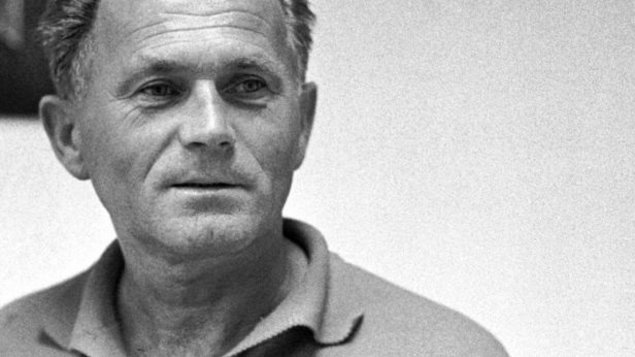 The 1960s proved a successful period for Bohumil Hrabal – Československý spisovatel published his Pearls of the Deep in 1963, and the collection won an award. A year later it was made into a film. Other books that followed during the 1960s included The Palaverers (Pábitelé, 1964), Dancing Lessons for the Advanced in Age (Taneční hodiny pro starší a pokročilé, 1964), Closely Watched Trains (Ostře sledované vlaky, 1965), Advertisement for the House I Don’t Want to Live in Anymore (Inzerát na dům, ve kterém už nechci bydlet, 1965), World Cafeteria/ The Death of Mr. Baltisberger (Automat Svět, 1966), and Murder Ballads and Other Legends (Morytáty a legendy, 1968).

The 1968 Academy Award-winning Czech movie Closely Observed Trains (Ostře sledované vlaky) is set in a small Czechoslovak town during the last days of the Nazi Occupation. It is, to some extent, based on Hrabal’s real-life experience. In 1945 he was a train dispatcher in the village of Kostomlaty, where he was almost killed by Nazi soldiers.

The plot centres around a young dispatcher who has recently attempted suicide because of sexual problems. Black humour abounds but it’s also poignant, and a movie well worth watching if you haven’t seen it.

After the Soviet tanks crushed the Prague Spring of liberal reforms in August of 1968, Hrabal found himself a banned author in his country, despite the success of the movie based on his 1965 novel.

He was thrown out of the Writers’ Union, and his books could only appear underground as samizdat texts. The 1970s were fraught with police interrogations and depression. Yet it was under these harsh and miserable conditions that Hrabal created some of his best works, including I Served The King of England (Obsluhoval jsem anglického krále) written in 1971.

The novel (and 2006 Czech movie) centers on the protagonist Jan Dítě, who yearns to belong to the most powerful social stratum and thinks money is everything. The novel takes place from the end of the democratic First Republic through the Nazi Occupation to the initial years of Communist rule. The young main character works as a waiter in exclusive hotels and earns much money. Dítě considers making money the means by which to ensure that he will belong to the politically correct upper class society. He marries the Nazi supporter Liza and achieves his dream of becoming a millionaire by selling the stamps she stole from Polish Jews after she dies in an air raid. Yet no one recognizes him as a millionaire because he profited from the war.

The Sad King of Czech Literature and his Consul typewriter

Hrabal’s most significant accomplishment in the 1980s was a trilogy: The first volume, In-House Weddings (Svatby v domě, 1986), depicts the banality of everyday life and straddles the line between autobiography and fiction. The protagonist celebrates by holding weddings and creating spontaneous happenings in his Libeň flat.

The third volume, Vacant Lot (Proluky, 1986), tracks his life from 1963, when Hrabal’s first book is accepted for publication, to the turbulent 1970s, when he is banned as an author.

In 1987, Hrabal’s wife, Eliška, died of cancer, and in 1988, his former home on Na hrázi Street was demolished to make way for a Metro station.

Hrabal spent most of the 1990s drinking beer at the Golden Tiger (U zlatého tygra) pub in downtown Prague and traveling to Kersko to feed his many cats. In 1991 the first of 19 volumes of his collected works came into print. The last volume was published in 1997.

That same year, Hrabal died when he fell from a window on the fifth floor of the Bulovka hospital in Prague where he was apparently trying to feed pigeons. It was noted that Hrabal lived on the fifth floor of his apartment building and that suicides by leaping from a fifth-floor window were mentioned in several of his books.

In accordance with his wishes, Hrabal was buried in his family’s crypt in a cemetery in Hradištko, in an oak coffin with the inscription Pivovar Polná (Polná Brewery), the brewery where his mother and stepfather met. 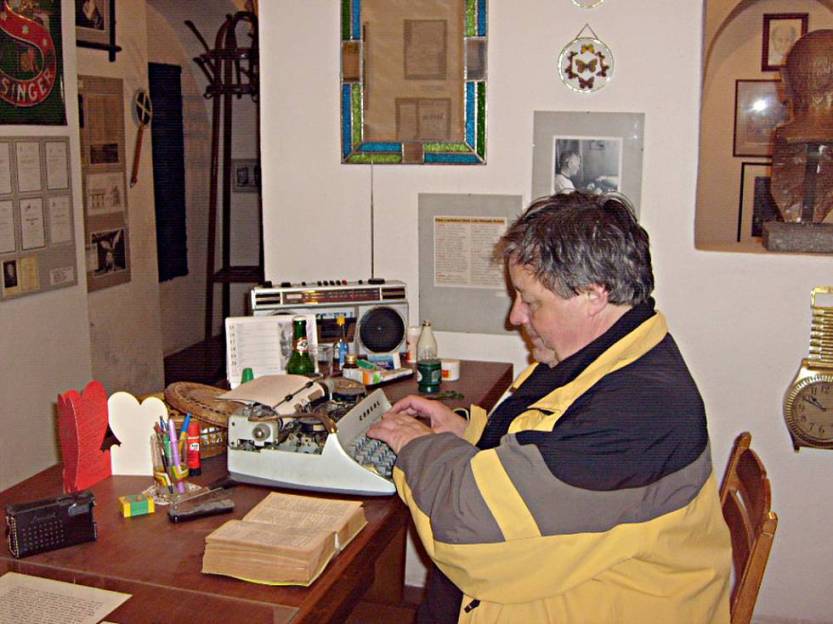 Hrabal’s typewriter is on display at the Bohumil Hrabal Centre, Libeň, Prague

A 1999 mural by the artist Táňa (Tatiana) Svatošová