The Magic Mountain, which Mann began writing in 1912, began as a novella; as a humorous, ironic, satirical follow-up to Death in Venice, which he had completed the same year. The atmosphere of the book was derived from the “mixture of death and amusement” that Mann had encountered whilst visiting his wife in a Swiss sanatorium. This fascination with death, the triumph of ecstatic disorder over a life devoted to order, which he had explored in Death in Venice, was supposed to be transferred to a comedic plane. 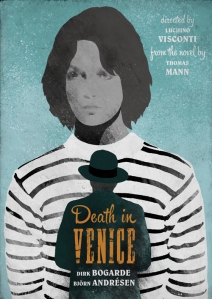 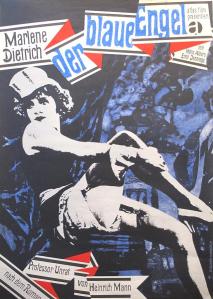 Heinrich was the more popular writer, turning out a book a year that in Thomas’s eyes were of inferior quality. 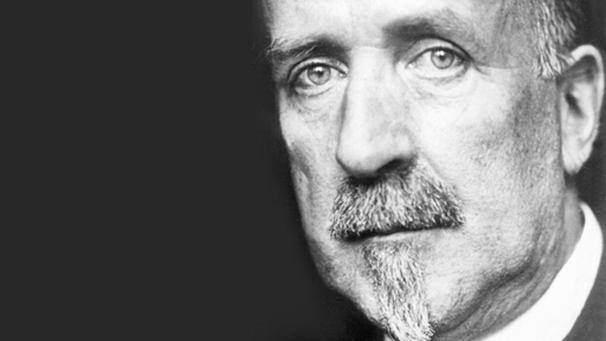 Heinrich’s criticisms of the growth of fascism forced him to flee for his life after the Nazis came to power in 1933. He died in Santa Monica, California, lonely and without much money, just months before he was to move to East Berlin to become president of the German Academy of Arts.

Having declined to play Gustav Aschenbach in a 1971 film of Thomas Mann’s Death in Venice, (a role accepted by Dirk Bogarde) Alec Guinness accepted the role of Mann’s brother, Heinrich, in a 1992 television film of Christopher Hampton’s play Tales from Hollywood – an account of German writers taking refuge in California during World War Two, among them the Mann brothers, Bertholt Brecht (and a posthumous Ödön von Horvath). 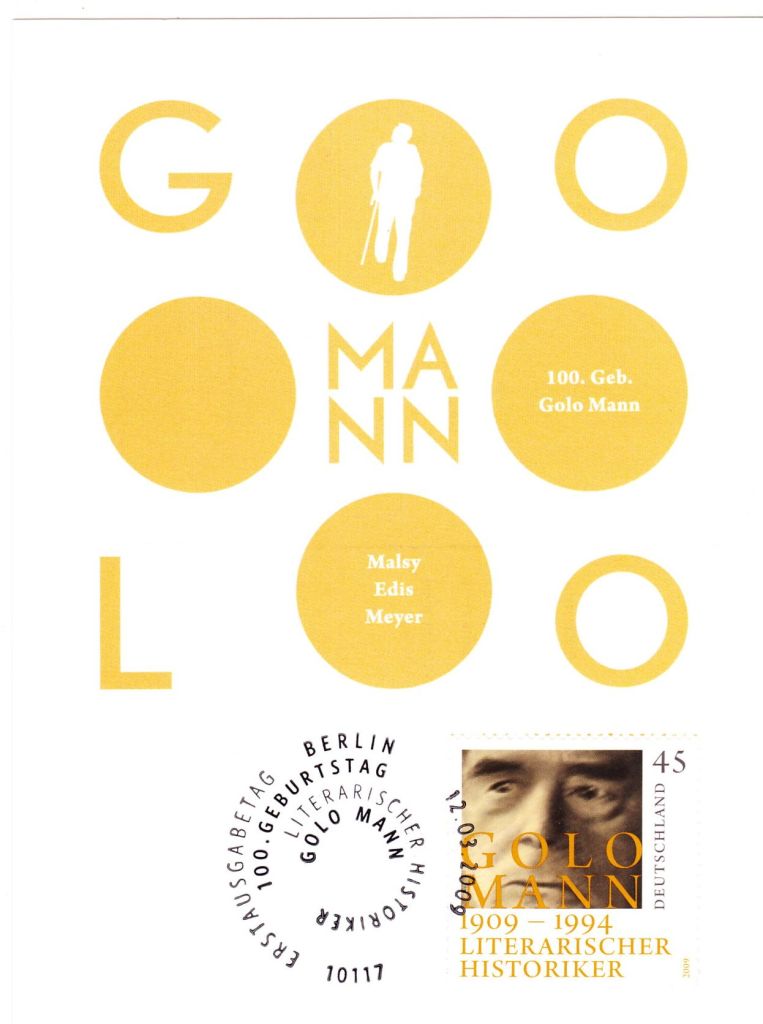 Golo Mann (* 27 March  1909 in Munich, † 7 April  1994 in Leverkusen) a German-Swiss historian, journalist and writer, was the third child of Thomas Mann. He was christened Angelus Gottfried, a name he found too imposing, so he shortened it to Golo.

Golo’s uncle Heinrich was the ‘black sheep’ of the family, but had a positive influence on the young Golo, who preferred him to his overbearing father. Heinrich wrote an autobiography in 1946: Ein Zeitalter wird besichtigt (‘Perspective of an Era’) in which Golo is  affectionately portrayed.

Golo’s mother, Katja, sympathising with the stress Golo felt in his father’s presence, enrolled him in a boarding school at the age of 14. It helped to liberate him from the traumas of life with a genius for a father. However, Golo stated that after his father achieved world-wide fame in 1924 with The Magic Mountain and received the Nobel Prize for Literature in 1929, he became easier to live with.

Golo’s childhood was dominated by his unruly elder sister and brother, Erika and Klaus, who both became writers, performing their first stories and satirical sketches in a cabaret Erika opened, Die Pfeffermuhle (‘The Peppermill’), which was eventually shut down by the Nazis.

By the 1930s Erika had already married and divorced the actor Gustaf Grundgens and, with Christopher Isherwood and Stephen Spender as go-betweens, had contracted a marriage of convenience with W.H. Auden in order to obtain the British nationality that would allow her to escape the Nazis and go to the United States. 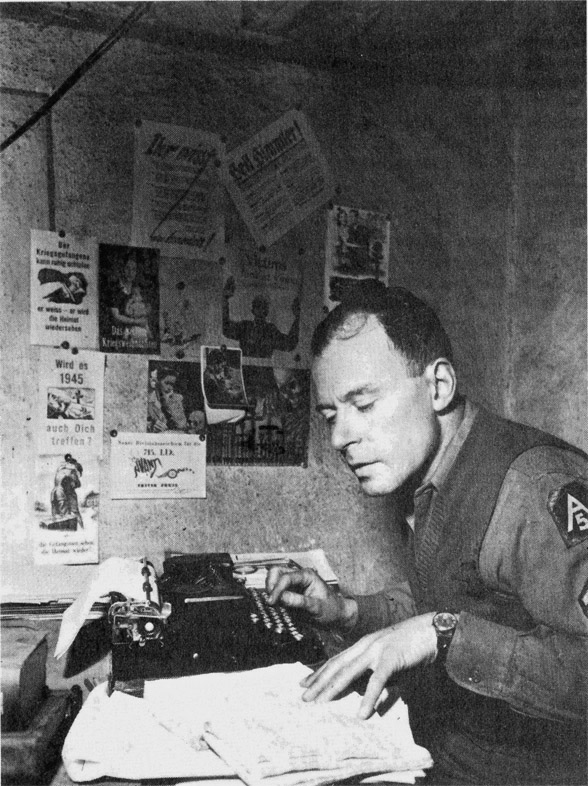 Klaus committed suicide in 1949. In 1952, Erika moved back to Switzerland with her parents. She had begun to help her father with his writing and had become one of his closest confidantes. After the deaths of her father and her brother Klaus, she became responsible for their works. Erika died in Zurich, Switzerland in 1969, aged 63.

A more serious academician than his elder siblings, Golo went to Heidelberg to study history and philosophy and was directed by the Christian existentialist philosopher Karl Jaspers in the writing of a thesis on Hegel.

When Hitler became Chancellor in 1933, the Manns left Munich and moved to Switzerland. Golo preferred France, where he taught German and history at  the Lycee St Cloud and at Rennes University. After a brief stay in Prague, he joined his family in Zurich. In 1940 he volunteered for the French army but because he was regarded as an enemy alien he was interned in French camps. He escaped and reached Marseilles, where he joined up with his uncle Heinrich, Franz Werfel and his wife, Alma, the vivacious widow of Gustav Mahler. From Port Bou, they crossed the Pyrenees into Spain.

Golo got on the last ship from Lisbon to the United States, where he served in the U.S. Army as an Intelligence officer (1943 – 1946). He later taught history at Claremont College in California.

After returning to Europe in 1957, Mann held the chair of political science at Stuttgart. In 1958, he published “German History in the 19th and 20th Century”. His best-selling work among his 16 historical studies was his 1971 biography of Duke Albrecht Wallenstein, an imperial general during the Thirty Years’ War.

Golo Mann and Olivetti Lettera 32 (above) 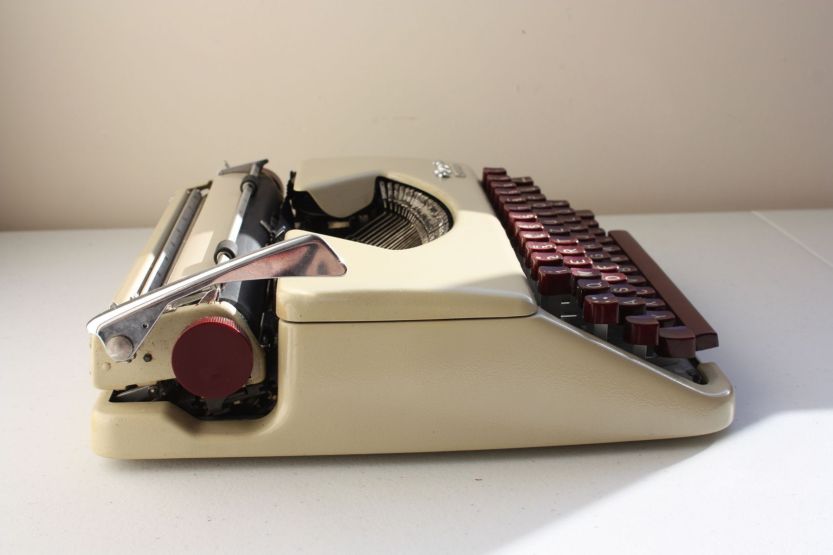 In the author’s case, one with white keytops, green platen knobs and shift keys …

2 thoughts on “The Third Mann”