This splendid 1985 postal cover and portrait of the German satirical essayist, poet, and critic, Kurt Tucholsky (born Jan. 9, 1890, Berlin, Germany — died Dec. 21, 1935, Hindas, near Gothenburg, Sweden) was issued to commemorate the 50th anniversary of his death. 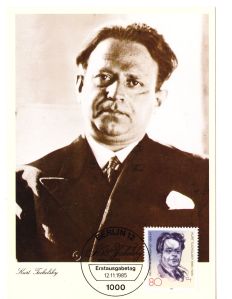 After studying law and serving in World War I, Tucholsky left Germany in 1924 and lived first in Paris, and after 1929 in Sweden.

In 1933 Tucholsky’s works were denounced by the Nazi government and banned, and he was stripped of his German citizenship.

Tucholsky’s output included aphorisms, book and drama reviews, light verse, short stories, and witty satirical essays in which he criticized German militarism and nationalism and the dehumanizing forces of the modern age. His poetry was set to music and performed widely in German cabarets.

“… the little fat Berliner who wanted to prevent a catastrophe with his typewriter.”