The Local Edition cocktail bar, located in the basement of the Hearst Building at the corner of Third and Market Streets in San Francisco, boasts a collection of old typewriters, printing presses, and the front pages of local newspapers from historic events such as the US declaration of war in 1941, the completion of the Golden Gate Bridge, and the resignation of Richard Nixon.

Once home to the William Randolph Hearst-owned San Francisco Examiner newspaper, the original Hearst building was destroyed by the earthquake and fire of 1906, then subsequently rebuilt as the 13 storey building we see today:

The day after the disaster of 1906, three local newspapers came together to publish a single issue. A copy signed by the collaborators is on display near the entrance to the bar.

Not surprisingly, this newspaper-themed bar is a favourite haunt of journalists, and was the chosen venue when the Center for Investigative Reporting celebrated its award-winning “Broken Shield” series (a series of online articles exposing police abuse and corruption) and left behind its George Polk Award plaque, which is now on permanent display behind the bar.

The American Journalism George Polk Awards were established in 1949 in memory of George Polk, a CBS correspondent murdered while covering the Greek Civil War (1946–49).

Greece in 1948 was a country reeling from two major conflicts. The Nazi occupation and World War II had left it weakened, and the Greek Civil War—already raging for two years—had torn it apart. One of the earliest clashes of the Cold War, Greece’s civil dispute pitted the American-backed royalist government against the Soviet-funded Greek Communist Party. Reporting at the front lines for CBS News, George Polk drew the ire of both sides with his uncompromising and incisive coverage.

In mid-May, days after going missing, Polk was found dead, shot execution style with his hands and feet bound. Polk had travelled north to Salonika in the hope of meeting with the Communist guerrillas. His Greek (National) wife, Rea, agreed to join him, but when she arrived at the hotel her husband had disappeared and had not been seen for several days. His pyjamas were missing, but not his shaving kit, nor his camera, nor his portable typewriter (and unfinished typewritten letter to his mother).

What transpired next was a mad scramble of finger pointing and international outrage. To appease its American backers, the Greek government quickly secured the dubious confession of a Communist journalist—though the bulk of the evidence pointed to the royalists. 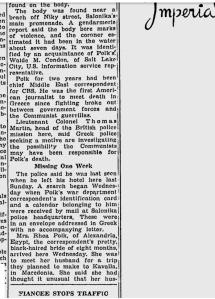 The most likely reason Polk was executed (bear in mind that the CIA conveniently lost or destroyed records pertaining to his murder) was because of his threat to expose Constantine Tsaldaris, the then Greek Foreign Minister and head of the (pro-royalist) Populist Party, for embezzlement of funds.

What happened to George Polk serves to remind us (not that we need reminding) of the risks journalists like Polk took, and continue to take, to uncover the truth or uphold the principle of freedom of speech.

So if you find yourself in downtown ‘Frisco, and happen to wander into that subterranean hideaway on Market Street, be sure to check out the typewriters and raise a glass to George. If I ever get the chance, I know I will.

You can read more about George Polk and the circumstances of his death here.