I picked up this hardback edition of Hitch-22, the memoirs of the late Christopher Hitchens (political journalist, literary critic, essayist, atheist) in a Salvation Army store … 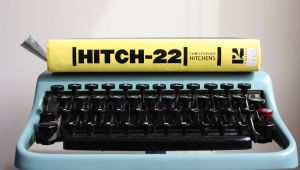 … second-hand but in such near mint condition it seemed no-one had previously turned its pages, which is a surprise, because I found it to be very entertaining.

During a 2010 Australian ABC interview on the Lateline show which coincided with the release of his memoirs, “Hitch” (he had no problem being referred to as “Christopher” but hated the abbreviation “Chris”) was asked about his insecurities as a writer:

“There was a great journalist, a Scotsman called James Cameron who was a big figure in my youth when I was trying to read and imbibe good essayists and good reporters and he said … in his Dundee accent, I can hear him saying it … he said “Every time I roll the paper into the typewriter, I think ‘today’s the day they’re going to find me out’.”

And it haunted me and sometimes I read stuff about myself that I don’t think is really all that merited and of course that makes me feel insecure.”

Which was unfortunate for Hitch, since his ABC interviewer, Tony Jones, seemed determined to plough a tedious furrow, pressing the author about the fact that the women in his life barely got a mention in his memoirs (the notable exception being a touching opening chapter about his mother “Yvonne”).

Persisting with his line of questioning (and implied male chauvinism) Jones cited an example “quote” that was meant to exemplify Hitchens’ attitude to women:

“No women of mine need ever work. None ever have. It’s just as well their day job was me and the bambini”.

“Obviously statements like that should be set in some special sort of type – 8 point ironic bold or something – so that people know that what Hitchens says or writes, or is quoted as saying in print, when uttered may sound slightly different. Maybe there is a bit of a spin on it.”

In an interesting article, written by Nick Papandreou, a Greek-American writer and friend of Hitchens, entitled “On Not Knowing the Half of It: Under the influence of Christopher Hitchens (a title which borrows from the title of an essay written by Hitchens about the discovery his mother was Jewish) I especially enjoyed this typewriter-related anecdote:

“One night at his new home, in the company of various friends and his second wife, Carol, the “divine” Miss Blue as he called her, I heard the clatter of a typewriter. Drink in hand, I wandered over. From the doorway I watched. There, bent over the typewriter, was Christopher, banging away at the clackety old keys with his index fingers. When he got up to welcome a few more guests, I snuck in. I read the piece—still unfinished—on the typewriter, which happened to be a review of a Martin Amis book for The Nation.

I immediately noticed something about his writing style that I decided had to do with the fact that he was writing on a typewriter, did not use Wite-Out, and did not want to bother going back to correct: the use of parentheticals. He would charge ahead, remember something, and then parenthesize it, in perfect style.

I was amazed that his review could stand on a first go. No editing. No revision. His sentences emerged complete, elegant, and complex, like all his work. The parentheticals, read as witty afterthoughts, became part of his style.”

‘Hitch-22″ an Olivetti Lettera 22 renamed in his honour.

3 thoughts on “Without a Hitch”