In his youth, Lundell was influenced by writers such as Jack Kerouac, and Allen Ginsberg, and by musicians such as Bruce Springsteen, Neil Young, and Bob Dylan.

Despite the fact that Neil Young was his greatest  musical influence, and despite the Bruce Springsteen-like postage stamp (above), Ulf was more popularly known as Sweden’s Bob Dylan, and like Dylan has been known to use a typewriter to write his song lyrics and poems (and novels).

A young Ulf Lundell with Facit typewriter (what else!)

In 2014, Lundell issued a typewritten press release that was scanned and sent by email …

The press release was issued to announce extended dates for a summer tour – plus a planned whale-watching trip during which time Ulf hoped for a change of Government in Sweden!

If the following publicity shot is anything to go by, I believe Ulf may have first tried to send his press release by carrier pigeon … 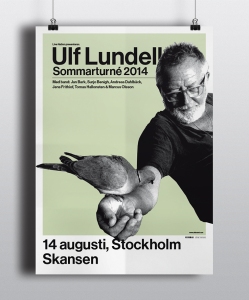 What ever became of that bird?