According to Martin Amis, in his introduction to “The King’s English” by Sir Kingsley Amis, “The King” was a nickname tolerated by his father. 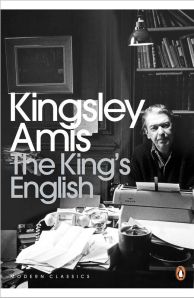 On the subject of the same book, Sir Kingsley had this to say: “This book, like all my others, even the most recent, was written not on a word-processor but a typewriter. Currently this is what it has been for the last thirty years, an Adler office model of the acoustic (i.e. none-electrical) sort, a characteristic it shares with all its forerunners. I stick to my alphabet piano in the first place for reasons to do with age, habit, experience, tight-fistedness and so on, but not for those alone.” 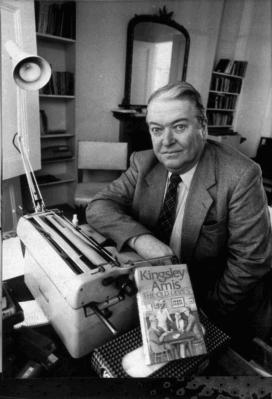 There’s an interesting entry in the Diary of Keith Waterhouse (the late English novelist, dramatist, columnist) taken from the archives of The Spectator, dated 26 JULY 1996.

In it, Waterhouse relates how he bid at a Sotheby’s auction for Sir Kingsley’s old typewriter:   ‘Unable to get to Sotheby’s myself, I sent my daughter to bid for me. She did so successfully, as she thought, and instructed the auctioneers to invoice me by fax.  The fax duly came, but addressed to a totally different Waterhouse living across the world in Townsville, Queensland.’

Keith had bid on the typewriter with the object of offering it to the Garrick Club (a club frequented by Sir Kingsley) in London’s West-End, where it would have held pride of place  in the library. He attempted to pay the invoice thinking there’d been an “administrative cock-up”, but Sotheby’s refused to accept payment having accepted  a proxy bid from a “Dr Waterhouse” in Australia.

After all these years, could Townsville, Queensland still be the whereabouts of The King’s Adler?

All I do know is that the Adler Universal 39 I picked up on Australian ebay  last week is not The King’s Adler. If it were, I’d gladly donate it to the Garrick club (at their shipping expense) –  not for the late Sir Kingsley, who may not have cared what happened to his typewriter, but for the late Keith Waterhouse, who obviously did.

With that in mind, I sent an email to the Garrick club asking if they’d be interested in accepting Sir Kingsley’s typewriter  – and did they currently have any typewriters on display. In responding, Marcus Risdell, curator of the Garrick club,  added a new Waterhouse to the mix:

“We do have a typewriter that interestingly belonged to Bob Waterhouse. It isn’t currently on display as we have nowhere to show it at present that is suitable. If the Amis typewriter was found it’s donation would have to be approved by the Works of Art Committee, so if it turns up I would advise contacting me direct so that I can put this to them.”

I’d like to think  that the “Works of Art Committee” would deem Sir Kingsley’s typewriter a work of art and put it on public display.

Maybe it is on public display –  somewhere in Townsville, Queensland?

6 thoughts on “The King’s Adler”