Having already read the book of Simon Gray’s play “Butley”, I knew I was in for a treat when I picked up the movie version (1974, directed by Harold Pinter) on eBay. 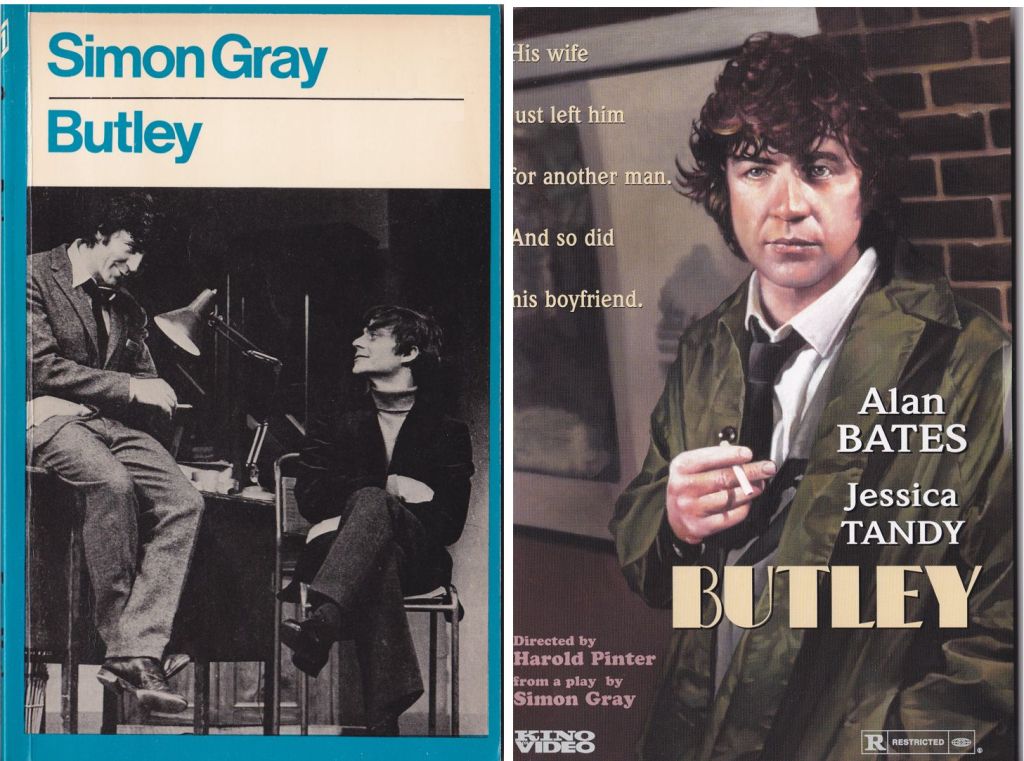 Below, a scene from Butley (the movie):  starring Alan Bates (and a Hermes Baby ?).

Below, another scene from the movie:  Alan Bates, T.S. Elliot (photo), and troublesome student.

To quickly sum up the plot: University lecturer, Ben Butley, is having a bad day – he starts by cutting himself shaving on one of his estranged wife’s razors (a portent of things to come.) Later, he learns that his boyfriend and colleague, Joey, is leaving him for another man, and that his wife wants a divorce and intends to marry a man who Butley describes as “the most boring man in England”. Worse still, this “massive bore” is on the verge of a major publishing deal, while another colleague has completed a book on the poet William Blake.

Butley himself is supposedly writing a book on T.S. Elliot but clearly hasn’t got very far.

Alan Bates was  Gray’s leading man of choice in various stage, TV and film productions of his work. Gray’s typewriter of choice was an Olympia SM9.

Both writer and typewriter are seen below on the set of a stage production of Butley:

The SM9 can also be seen here (just) on the desk of Gray’s writing room:

Gray used his SM9 to type the first drafts of his plays and thereafter used a computer to transcribe them into digital form. According to an online obituary published by the Daily Telegraph: “He never drove and wrote on an old  Olympic typewriter.”

A trivial mistake, but at least the same obituary had a nice quote to redeem it:

“Much of his work was filled with disgust for the betrayals of contemporary  middle-class life – that peculiarly English cruelty of bumbling other  people to their own destruction. Sexual jealousy went hand in hand with a  distaste for the mechanics of sex; “I’ll catch them at it,” says Benedict in   Close of Play, thinking about his scriptwriting wife and her lover. “At   their f***ity-f***ity, clackity-f***ity, f***ity-clackity.”

I can just picture Gray, cigarette hanging off his bottom lip, hammering away on his “Olympic” as he wrote that!

Below, a scene from the TV production of Unnatural Pursuits, 1992 (based on Simon Gray’s diaries describing his experiences of productions of his plays in the UK and USA) starring an older Alan Bates and, by the look of it, an even older typewriter.

Another interesting read is: “The Perils of the Playwright: A Review of An Unnatural Pursuit and Other Pieces” by Simon Callow (first printed in The Sunday Times on 1st September 1985),  go here.

3 thoughts on “Every cloud has a Gray lining”